Despite just finishing 4 tough days hiking the Kepler Track, Jordan was tempted to hit the Milford Track with Ryan who had planned to start it the next day. After mulling it over, I was eventually convinced we should spend our last days of vacation hiking the Milford Track despite the dismal weather forecast and zero recovery time.

As we drove into Milford Sound, this time it was a beautiful evening with perfect blue skies and sun shining. Interested in seeing the comparison between our rainy day on the Nature Cruise, we headed down to the docks to check it out. Surprisingly I have to say I prefer the mystery the rain and fog brings as the clear day was completely silent as no waterfalls were flowing.

Early morning, suited up in our Kathmandu rain gear, we boarded the dingy boat for a quick ride to the track entrance. With the rain already starting to sprinkle we had a feeling this was a going to be a wet day. Excited to start our hike though, we pushed on through the rain.

Marked as an ‘easy’ track we expected the path to be similar to Kepler – well groomed and easy to navigate – but were quickly surprised to find ourselves crawling over fallen trees and washed out rivers. Jordan and Ryan were a lot more excited for unexpected challenges than I was…it was here I started to wonder whether we made the right decision.

As the rain poured down harder and harder, the track became flooded, making it difficult to avoid the water. Soaked to the bone, and with a knee that was acting, up making it difficult to even walk, my pace slowed significantly and my spirit began to feel defeated. Jordan ran ahead to drop his bag off at the hut and promised to come back for me. By the time he returned I was absolutely done – emotionally and physically. Worried my knee was going to keep me from completing the trek, I dreaded the thought of being stuck in a hut for 3 more days.

As usual, Jordan was in high spirits, shaking off the rain and relishing every moment in the beautiful scenery. Seeing I needed a pick-me-up, he started singing a song to try to cheer me up and within a few moments I was laughing so hard I was crying as he belted out a tune he created on his jog back to meet me. It went something like this – “On the Milford Track! On the Milford Track! Nobody else around! Because no one else is this crazy! On the Milford Track!”…. I can always count on Jordan for some positive energy when I’m feeling down – one of the many traits I love about him :)Luckily when I finally reached Dumpling Hut (after a very long 18km), Ryan had the fire going and I was able to get out of my wet clothes and start the drying (and thawing out) process. Once I was warmed up my spirits were back up and I was happy we made the decision to do the Milford Track. The hut was situated in the middle of beautiful rocky mountains with some snow cover at the top and waterfalls flowing from the rain.

In the morning my knee was feeling better, so I decided to attempt to make the hike up the mountain and over the pass to the next hut. Throughout the last few days of intense hiking, I have been amazed at the power of the body to heal itself. I can go from my muscles being so sore I can barely walk, to the next morning raring to go and blasting my way up the next steep mountain.

Luckily it was a beautiful morning, with glimpses of blue sky and no rain allowing us to enjoy one beautiful waterfall after another. I could finally understand why this was considered one of the most beautiful walks in the world.

As we neared the summit, the terrain began to change and the tropical vegetation turned to mountain shrubs with a light dusting of snow. As the clouds parted, we could finally see a glimpse of the massive mountains that were surrounding us the whole time. The valley below even came into view which gave us a glimpse of where the track continued to Lake Te Anau. It was incredible!

On our way down the other side the rain started to sprinkle, but luckily nothing compared to the day before. The Mintaro Hut was a welcomed site after another long day of hiking. A couple guys from Georgia were also on the same path as us, so we spent the evening teaching them the card game Pig which proved to be quite entertaining yet again.

Normally, to finish the track in reverse, it would be a leisurely walk down the rest of the mountain and through the valley to the end of the track, but with that avalanche warning, we ended up making the trip a lot harder on ourselves, by reversing back up the mountain and down to the Dumpling Hut again. As we started up towards the summit, the snow began to fall at about 800m. It was a beautiful scene with the tropical vegetation covered with fresh fluffy snow. Felt almost like Christmas!

As we reached the top, the snow fall became quite heavy. Since we were the first ones up in the morning, it was awesome to break first track in the snow, making our own path up the mountain. Jordan and Ryan were in their glory, tramping through the deep snow as it blew around us.

Making a pit stop at the shelter, we decided to wait for a clearing as we dried off and warmed up a bit. Within an hour the clouds parted and the sun appeared for a brief moment to allow a spectacular 360 degree view of the incredible mountains around us freshly draped in snow.

The steep decent through the emergency track (as the main track was closed due to avalanche risk) made it difficult on the knees, but I made it back to the hut with plenty of time to dry. On our way back we passed a group of locals who work in Milford Sound, and even ran into Mike who was our Nature Cruise narrator the Saturday before! Small world!

When the crew returned to the hut just before sunset, they shared stories of their climb in behind the infamous Sutherland Falls – the highest falls in New Zealand and 5th highest in the world. Jordan and Ryan decided to make an early morning back-track to check them out for themselves, but unfortunately not wanting to take a risk with my knee, I stayed back and headed out on my own in the morning.

I ended up making great time as I sang to myself in the pouring rain (which was even worse than our first day). My dad gave me some great advice as a kid (and my recent manager Dwight also preached this) – “How you feel about something is often a choice”. Despite the weather being even worse than the first day, today I CHOSE to take a positive spin on the situation and fully enjoyed the beauty around me despite the weather.

Despite being in good spirits, I still was never so happy to see a boat in my life. The dingy ride back was perfect as the rain stopped for just a few minutes and we were able to see amazing waterfalls all over the surrounding mountains – some twice as high as the Empire State building! I was finally able to see Milford Sound at the perfect time – just after a rain, clear of fog! The perfect way to end our trek! 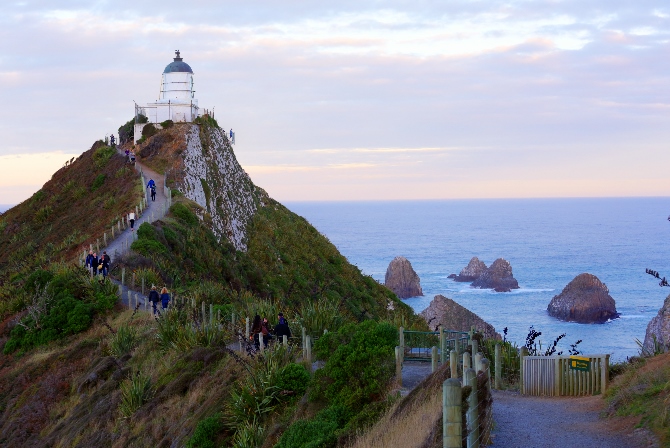 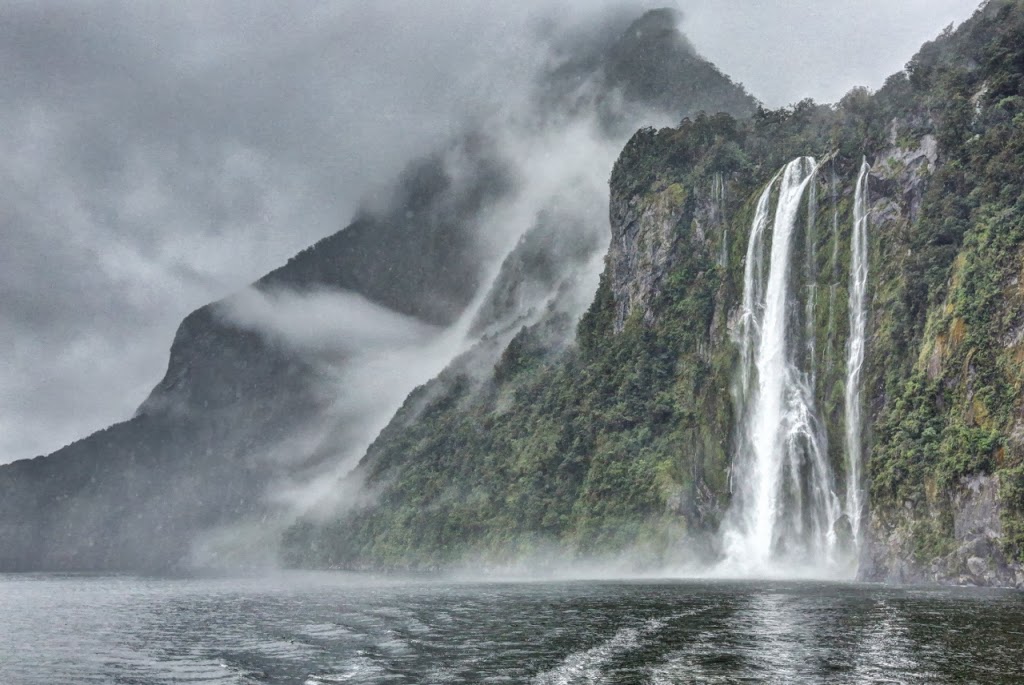 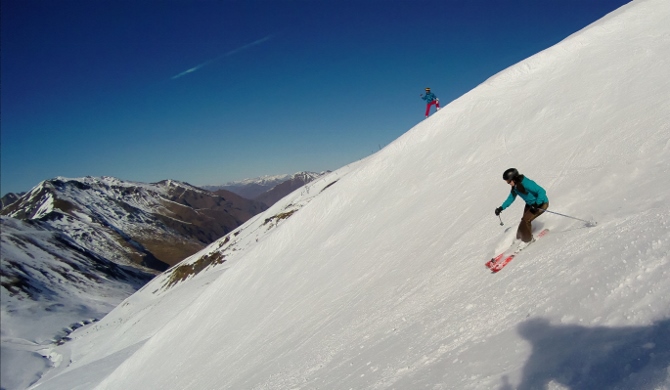