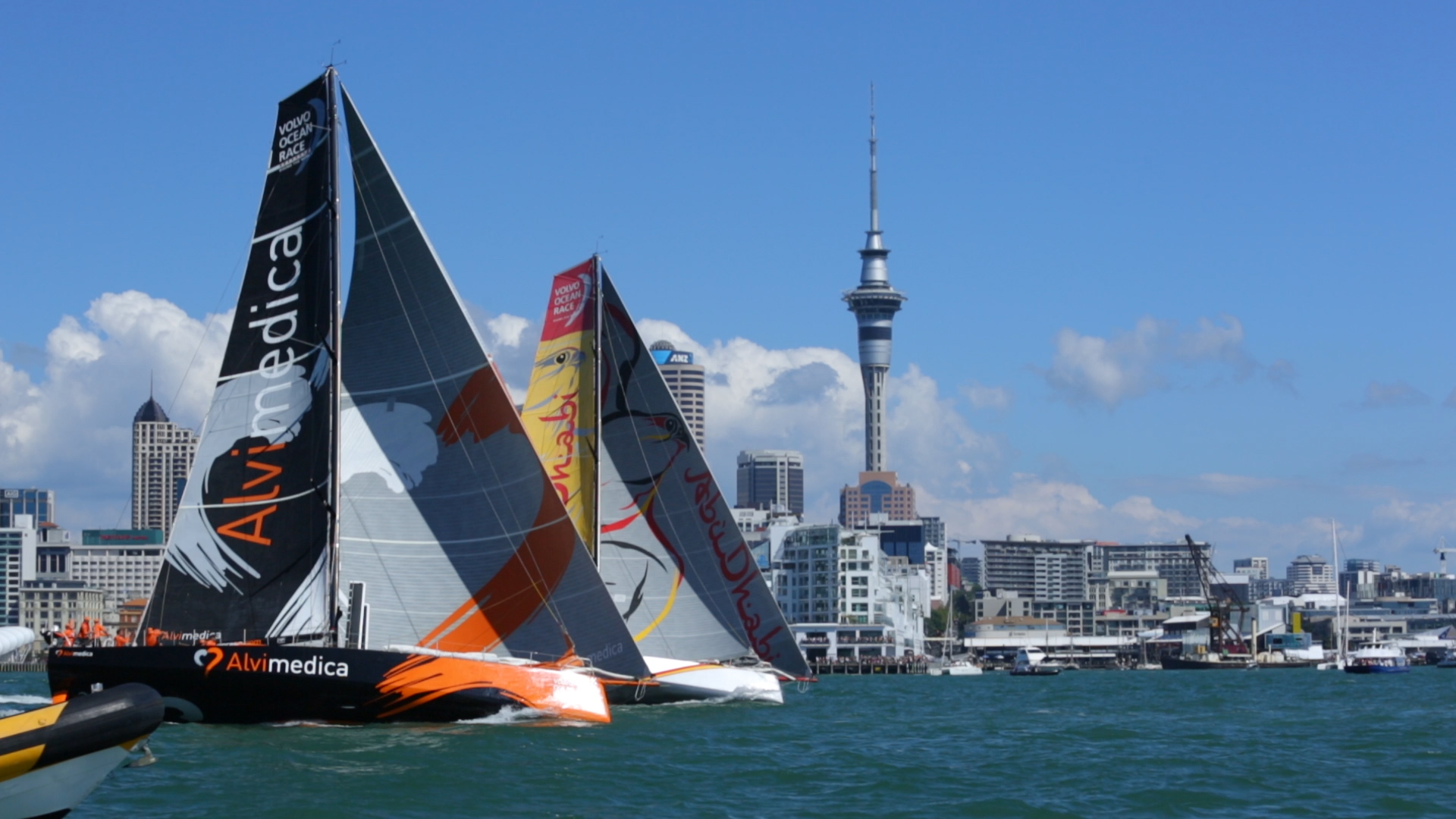 If you asked me a year ago whether I thought we would be participating in the Volvo Ocean Race, there’s no way I would have predicted that we would be given that opportunity. To be honest, I hadn’t even heard of the Volvo Ocean Race prior to us being approached to be a special guest with Team Alvimedica during their stopover in Auckland. I didn’t come from a family of sailors and outside of an hour ‘learn to sail’ experience just a few months ago on a windy day in Wellington, I had never even been on a yacht before! However, after a few minutes chatting with Team Alvimedica’s Digital Media Coordinator about what this intense race around the world entailed and the activities we were being invited to take part in, it was an easy YES to this once in a lifetime opportunity. For those who may not be familiar with the Volvo Ocean Race, it is the world’s premiere offshore race that tests the best sailors in the world in mental and physical endurance as they sail around the globe. Established in 1973 as the Whitbread Round the World Race, Volvo took over ownership of the race in 2001, which takes place every 3 years. Historically the boats were all unique, designed individually by each team, but this year Volvo has created a standard design that all teams are provided in order to level the playing field and truly let the race be determined by the talent of the sailors on board.

Departing from Europe in October with 9 stop overs during a 9 month period, this year’s race is nearly 40,000 nautical miles, with teams expecting to be on the water at least 150 days – the longest route in history! 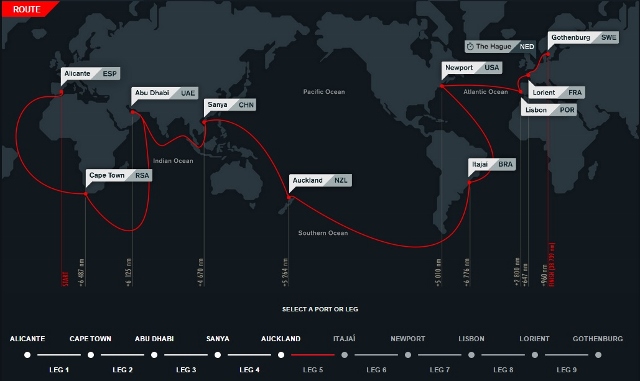 Team Alvimedica, one of the 7 teams in the race, invited us to take part in some of the Auckland activities while they were in port. The youngest team – with an average age of 31 – Team Alvimedica also has the most Kiwis with 3 of the 9 crew members from New Zealand making them the ‘unofficial’ Kiwi team. The change in standardizing the boats has definitely brought the race to a tight competition with 4 different teams winning each of the race legs so far, and even the in-port races! It has also had its share of drama with Team Vestas Wind running aground on a reef in the middle of the Indian Ocean, destroying the boat, but surprisingly without injury to the crew. The next leg of the race is by far the toughest as the teams depart Auckland towards Brazil. Some of the worst weather conditions are faced in the Southern Ocean with waves up to 100 feet (30m) and winds that can reach 60 knots (110km/hr). Last year’s race saw only 2 boats successfully pass through this stretch of the race so nerves are definitely on high as the teams prepare for the next leg.

Before they depart though, a weekend of festivities was held in Auckland following a much needed rest and maintenance of the boats since they arrived on February 28th. On Friday we were greeted by Team Alvimedica with team hats and t-shirts as we joined the crew for a day of excitement on the water! 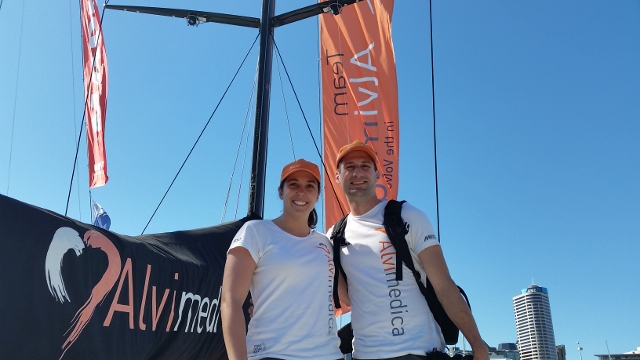 As we boarded the Volvo 65, I was actually surprised how small it felt compared to what I would have expected to house 9 crew members around the world. Designed for strength yet minimal weight, it was a sleek and beautiful, but what was most surprising to learn was how these guys lived during the 3-4 weeks at sea. Let’s just say it was FAR from glamorous. With teams of 3 on rotating shift schedules of working, being on call and sleeping every 4 hours, it’s a wonder these guys don’t go crazy from exhaustion. Sleeping in hammocks, usually dripping in their wet weather gear (as it just takes too long to take on and off) these guys live off freeze dried meals and desalinized water while trying to manage their water logged hands and feet. Also – there is zero privacy. The ‘bathroom’ is basically a toilet with a curtain and showering is done with wet naps. Despite the conditions, this opportunity is what they all dreamed of and aspired to do since they were young sailors. And one many people seem to say they’ll never do again, but somehow end up racing the next year and so on – so it’s definitely for the very passionate! Right, so back to our experience! Today the teams were racing against each other in two ProAm races that basically mix crew members with their guests to compete in a race through the harbor – a warm-up to the actual race the next day that counts towards the standings.

After a quick briefing from our skipper, Charlie, we were off helping the crew bring up the sails and preparing for our race. As the boats began to line up, waiting for the start gun to fire, we did our best to get into a good position. and suddenly BANG! went the gun and we were off! Having little to no sailing knowledge, I felt a little like a fish out of water, but with the help of the crew, I was able to jump in and start ‘grinding’ while we were tacking. (hope that’s the right lingo :P) What made it interesting was it’s not like these boats can all race in a straight line. Each crew had their own tactics for tackling the race, and with a wide harbour to tack back and forth in, the boats were all over the place making it difficult to determine your rank during the race. Even though there was a level of competition in the air, the Alvimedica crew were really great about letting everyone get a turn steering, ‘grinding’ and helping with the sails. Although we came in last in the race, it was no question everyone on the boat had a blast! Unfortunately that meant we missed out on the podium and getting metals, but it was all in good fun to say the least. The next day it was game time. After a morning of touring the boat shed, learning about the crew of people it takes to keep these boats maintained, we were out on the RIB to get an upclose view of the in-port race. Team Alvimedica came out strong, pulling ahead of the pack and with more on the line today you could really tell the guys were pushing the boats to their limits as they leaned hard into the wind! It was an intense race as the teams zigzagged back and forth through the race. It wasn’t long though before the all-female team, SCA, began to break away from the pack, taking a commanding lead ahead of the other all-male boats. Seeing that the guys were unlikely to pull off a win, I couldn’t help but cheer for the girls and hope they showed these guys who is the boss! Despite some slightly unsportsmanlike maneuvers from a couple of the other boats, the ladies from SCA held strong and finished first place in the race! Girl Power!!!

It was pretty exciting way to end the weekend and one I won’t soon forget! Big thanks to Team Alvimedica for inviting us on such an amazing experience and wish you guys the best of luck in the race! We’ll be watching and cheering you on! 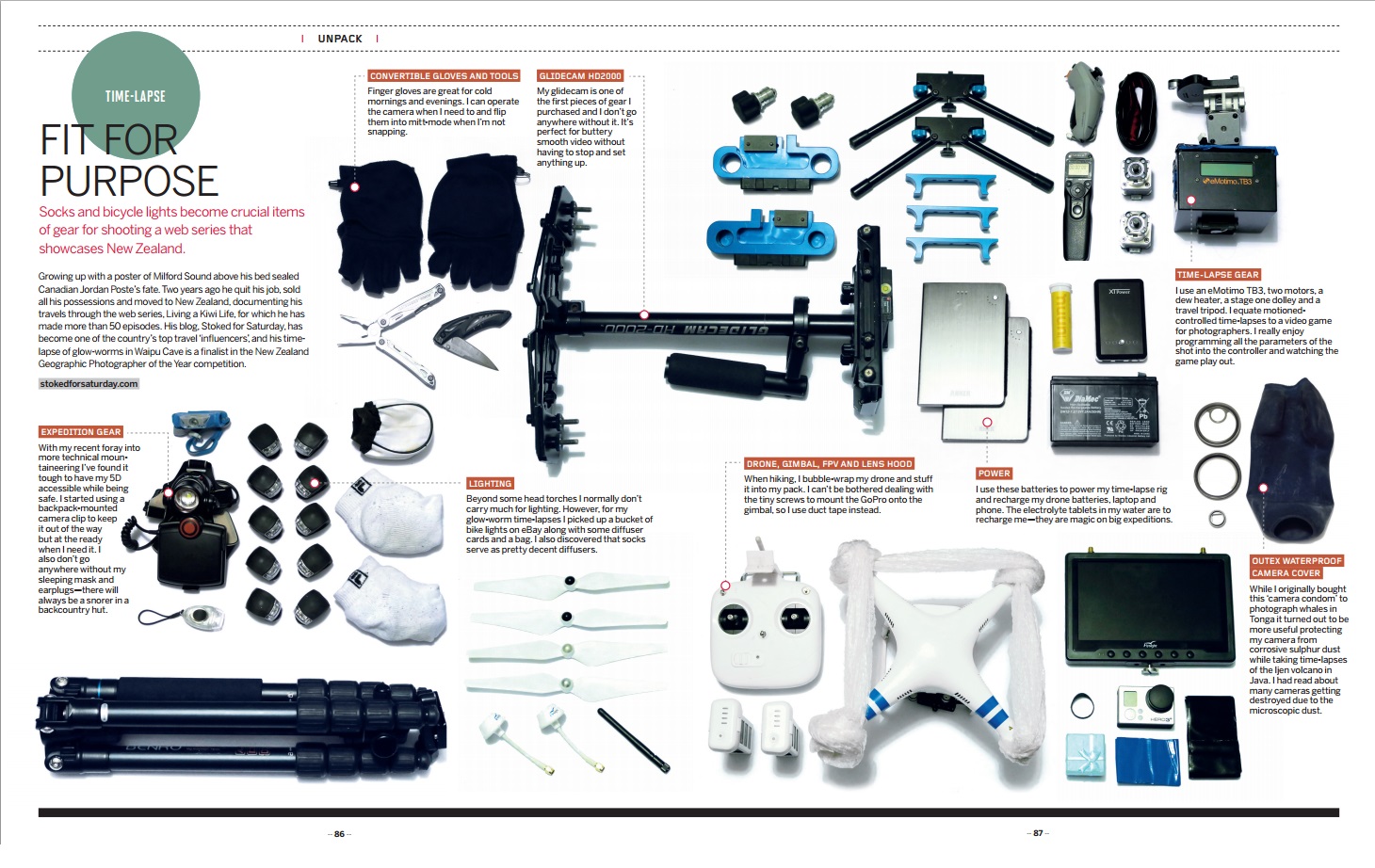 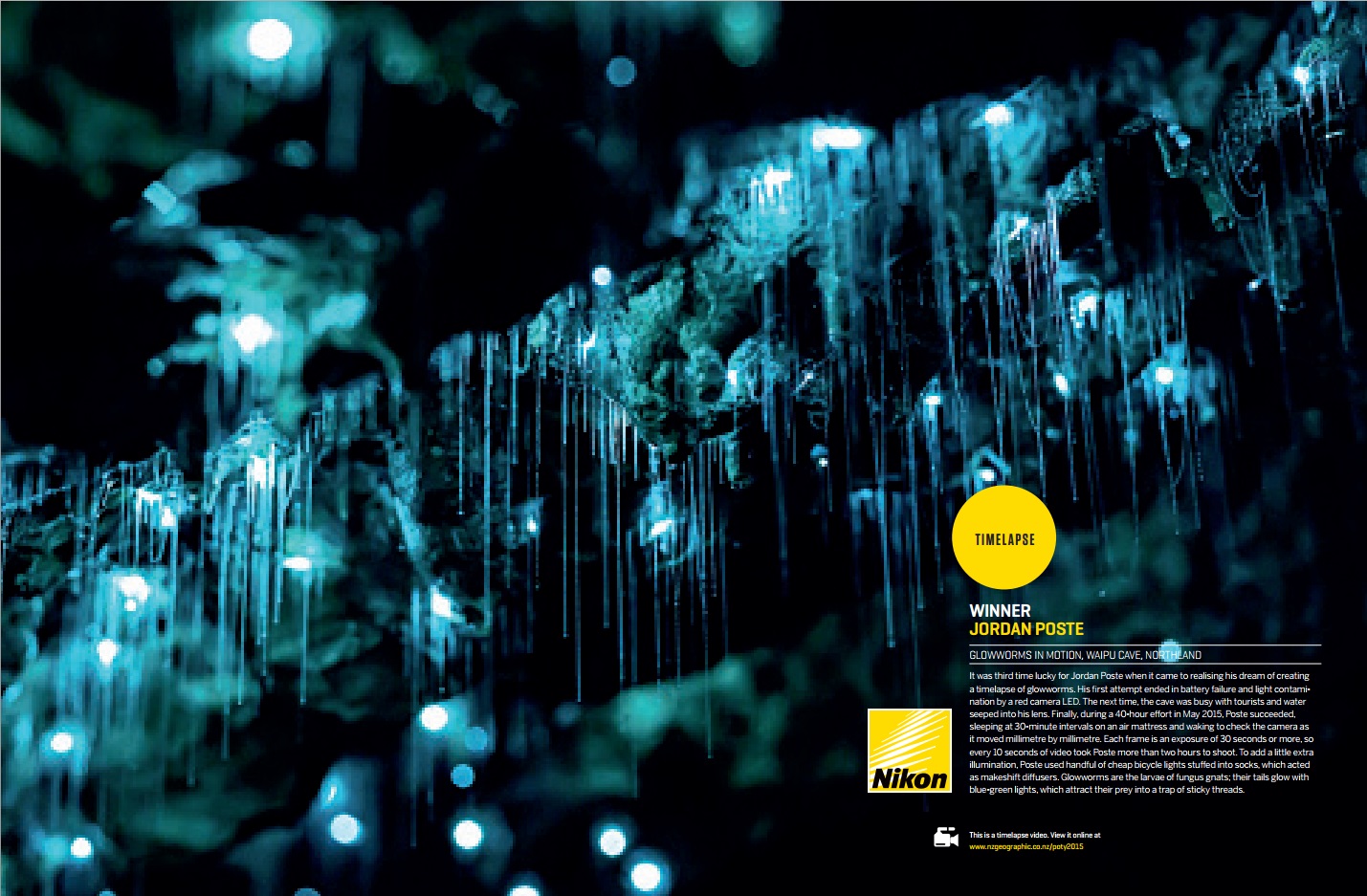 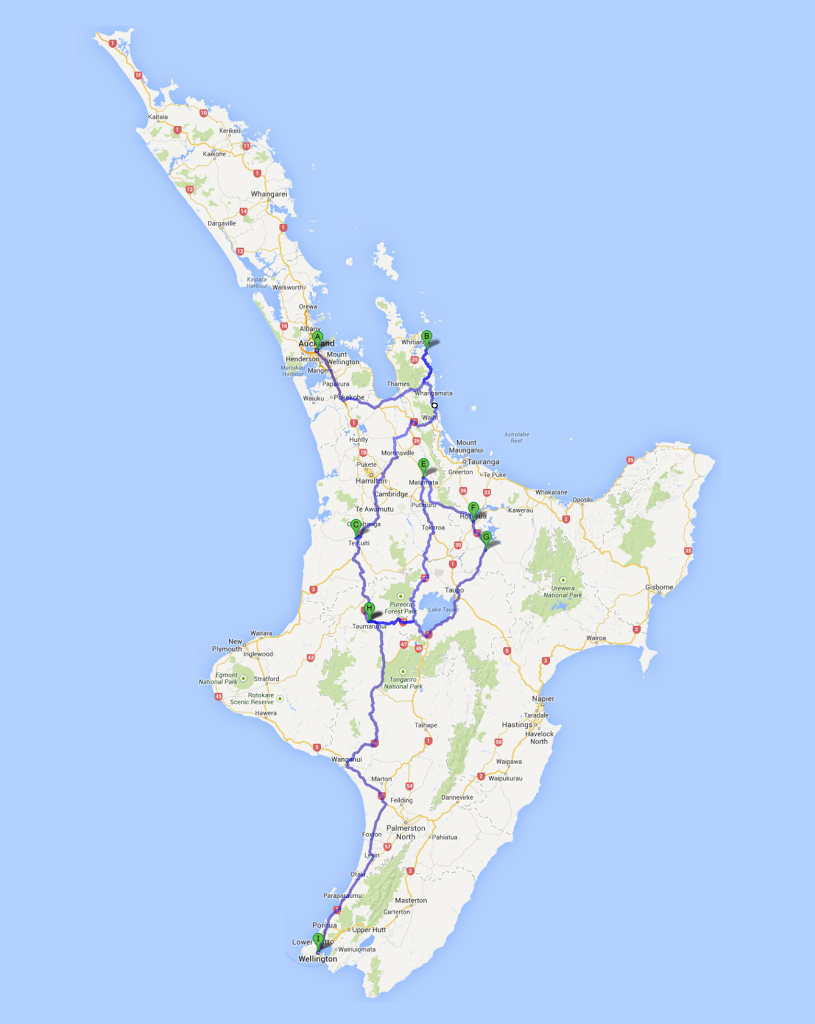