One of the top destinations for our trip to Indonesia was to visit the Kawah Ijen crater on East Java. When photographer Oliver Grunewald published photos of its famous electric blue flames in National Geographic in 2014 it put Ijen on the map. After seeing that article – we just had to check it out ourselves!

The Ijen volcano is a working sulfur mine that spews toxic gases 24/7 and is the largest blue flame area in the world. Local people refer to it as ‘Blue Fire’ which can only be seen at night. It’s popularity had grown over the last few years and is now the biggest draw to the area since they started the midnight hikes. While researching the best way to experience these blue flames, I came across a blog that gave tips on exploring it without a guide. Jordan and I usually like to do these types of our adventures on our own without a guide, but after researching further we decided it was best to go with a local operator – not only to support the local tourism community but to ensure we were safe and able to get the best experience. I also heard they recently changed the laws to prohibit any tourists from going down into the crater if they are not escorted by a local guide as a french tourist lost his life a few years ago, falling to his death at the top of the crater as he chose to go without a guide.

We ended up going with a company we found through our taxi driver at the airport. It was half the price of the tour arranged by our hotel, and after looking up reviews on Trip Advisor it felt like the best option (Price was 400,000 IDR or~$40 CAD per person – I forget the name of the company though!). Our adventure started at 12:30am when we were picked up by our guide in a Jeep. The clutch burning hour climb up the mountain brought us to the start of the track. We expected there to be maybe a dozen other people but were shocked when there must have been well over 100, many of whom were locals due to the local holiday that day. That also meant we were surpised with a ‘holiday surcharge’ of ~$10 CAD each when our guide went to pay our National Park fees at the gate. The crowds meant there was a line-up to pay therefore we started getting anxious to get moving not wanting to miss the blue flames (and wanting to beat the crowds) as it was supposed to be a nearly 2.5-3hr climb. Just after 2am though we were off up the steep dirt road through the sea of people with only our head torches lighting the way. The smell of sulfur was strong and became more intense the closer we got to the crater. About an hour into the climb it was so strong we had to put on our gas masks to keep from choking. As expected, the quality of the gas masks wasn’t great, and poor Hillary’s filter were so clogged she couldn’t breathe with it on, so resorted to using her scarf as a mask. (TIP: Choose the dual filter gas mask if you have a choice!)

We were making great time and was able to jump ahead of the crowds. We were one of the first to reach the top of the crater after about an hour and a half of non-stop uphill and it was here we met our first sulfur miner. These men have to be some of the hardest working people in the world. Those sulfur baskets weigh between 75-90kg and are carried on their shoulders with no protection from the toxic fumes. Not only do they carrying these baskets up the 300m, 45-60 degree gradiant crater but back down the mountain 3km for weighing – and usually twice a night! Jordan had a go at lifting the sulfur baskets and was amazed at how awkward it must be to carry it using just a bamboo pole. It’s no wonder these men have cronic injuries to their shoulders and back, let along the damage to their lungs…. As we began our decent into the crater down the rock path, I really began to appreciate having our guide. There was little trace of a track and it required some careful navigation down some steep sections. In the distance I could see the light from the blue flames lighting up the surphuric smoke at the bottom of the crater.

It took us nearly 45mins to finally reach the electric blue flames. For safety, we weren’t allowed to get very close to the flames however our guide skipped his way up towards the flames to snap a few photos for us. NOTE: If you’re planning to visit Ijen – be aware of the damage this toxic environment can have on your camera equipment. Known as one of the top 5 places to ruin your camera, Jordan took every precaution and carried our DSLR in our Outex rubber case to protect it from the sulfuric gases. The pictures really don’t do it justice, but these flames were absolutely stunning to see in person! They flickered in the darkness as the sulfur gases emmitting from the volcano ignites, providing this incredible natural wonder.

As we lit up the area surrounding the flames, we could see the ceramic pipes condensing the molten sulfur. An active vent at the edge of the crater lake is the source of elemental sulfur that supports the mine. These escaping volcanic gases are channelled through a network of pipes that eventually pools on the ground as it cools. Miners break up the cooled material and carry away 14 tons a day in those woven baskets. Even though the work at the mine is some of the best paying jobs in the area, these men still only make ~$5.50-$8.30 per day. Many of the miners carve out these cute sulfur figurines in hopes of selling them to tourists to make a little extra cash. I really wanted to buy one from the men, but feared what the New Zealand customs office would think if I showed up at the airport with it. Instead, we gave them a tip whenever we took their picture (which has come to be expected) I was really happy we had beat the crowds as it was starting to get busy at the blue flames. Just as first light was upon us we began our trek back up and out of the crater – taking the same route as the miners with the sulfur on their back. The grade up this section is so steep, there are several points along the track for the miners to take a break and relieve their backs from the weight of the baskets.

From here we could also start to get a glimpse of the famous, acidic crater lake. The one-kilometer-wide turquoise-colored lake is recognized as the largest highly acidic crater lake in the world. With a pH of less than 0.3 (on a scale of 0 to 14) – its not wonder it holds that title! By the time we reached the top of the crater, sunrise was here and the sky was a blaze in pink and purple! The contrast to the turquoise lake was beautiful as the cloud of gases grew thicker and thicker. Another reason to be sure to get to Ijen early as the day went on it really clouded in and made it even more difficult to breathe. We pulled off our masks for a quick photo and were on our way. We took one last look into the volcanic crater and decended down the mountain back to our Jeep. It was surprising how many people were still making their way up the mountain dispite knowing they would have missed the blue flames.

If you ever get a chance to visit Indonesia, I would highly recommend checking out this incredible volcano on the island of Java. There isn’t much there besides the Ijen crater, and the journey on the ferry is one I won’t soon forget, but it was all worth it to experience those electric blue flames! 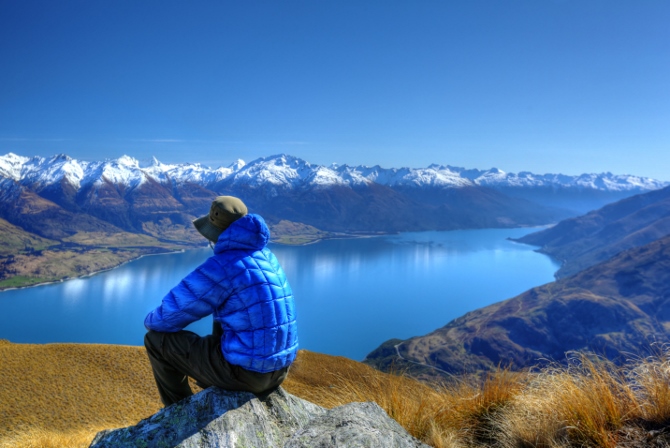 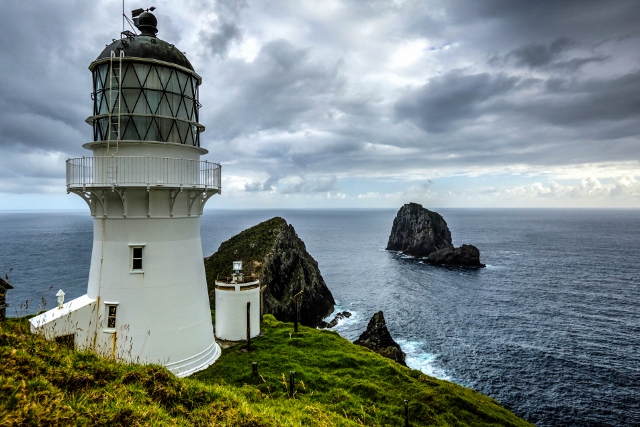 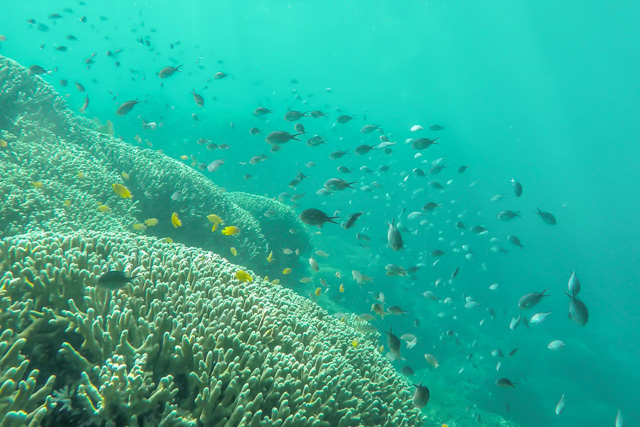 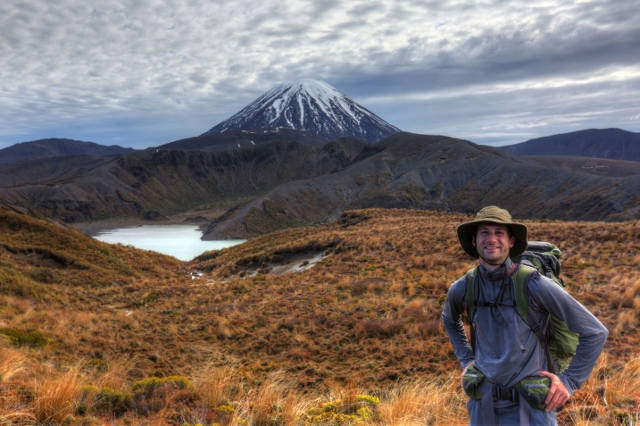