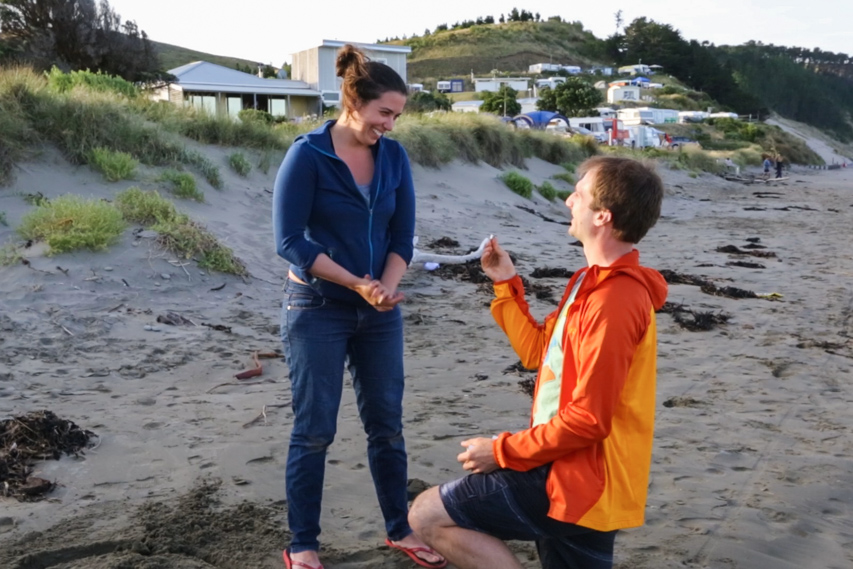 Rewind 5 years and I would have told you I never wanted to get married, and didn’t want kids. Part of that was just rebelling against the ‘norm’ but it was also driven by my (flawed) perception that being married with kids equated to a boring life. It wasn’t until I met Jenna that those reservations evaporated. One of the first things I learned about Jenna was that when she turned 16 she didn’t rush to go get her driver’s license like everyone else. Instead she went skydiving. And not tandem skydiving, she jumped out of the plane by herself with only the assistance of radio instructions through a headset to tell her how not to die. Soul Mate, check.

So after several years of non-stop adventure together it got me to thinking. How can I propose to the most amazing girl on the planet in a way that rivals her awesomeness? Jenna and I had become fairly hardcore about mountaineering and climbing and my first thought was to propose to her on top of a treacherous summit somewhere. But one thing still bothered me, I wanted the proposal to be an experience and not just an event. Asking a simple question that lasted less than a minute was just too easy, I wanted the proposal to be more representative of our life together, one awesome adventure.

So I knew I wanted an adventure proposal that resembled the rest of our lives together. And that brought me to thinking about the most important things to make sure we remembered as we grow old together. That’s when I wrote down the following 5 things:

I decided I wanted to use these values as themes to incorporate in this adventure proposal. That’s when I first started playing with the idea of An Amazing Race or Scavenger/Treasure Hunt. We had spent the last two years adventuring around New Zealand like maniacs and I knew Jenna would love an excuse to keep rampaging all over the country. To connect them all I decided to purchase as many cool looking treasure boxes as I could from ebay and the New Zealand classified site Trademe. Inside the boxes would be a key to open the next box and each box would contain clues to get to the next stage as well as a few nice sappy messages 😉 To weave everything together I needed a master treasure map that Jenna would find at the start of the adventure. With the help of some coffee, an oven, and some very delicate artistry I managed to produce the following (very authentic looking) pirate treasure map. But wait, there was still the challenge of the ring itself. I wanted the ring to represent the same thing as the proposal, our non-stop life of adventure. I also wanted everything about it to communicate how unique I felt Jenna was. After much painstaking research on metals I landed on Palladium for the band. The fact that it is not a common metal used in engagement rings made it feel unique and the fact that it was as hard as platinum helped symbolize the strength of our relationship. For the stone to fit the unique requirement I was leaning away from a diamond in favour of a less common stone called Tanzanite but something about the deep blue/purple color made me think more of costume jewelry. I was on the lookout for something that had more of a blue/green colour that symbolized trees, water and our adventure filled life when I was randomly looking though a precious stones sample case at a jewelry manufacturing shop and there it was. A beautiful square cut blue/green stone called Tourmaline. I asked one of the guys at the workbench about it and he told me he had picked it up 15 or so years ago at a show because he liked it and that Tourmaline was his favourite stone. I knew I had found what I was looking for and turned the display box over to look at the price…… $56? Clearly there must be some mistake, how can this amazing looking stone that I preferred over the Tanzanite and Australian Sapphires that were thousands of dollars be only $56? I asked the jeweler and he just kind of shrugged and said, “if that’s what it says”. After convincing myself it was ok to have the feature stone cost less than a trip to the grocery store I worked with the same shop to design the ring. I had looked at a lot of palladium ring designs on the internet and found one that I asked him if he could copy. He said yes and after a couple months of coming in and tweaking a few angles on the ring here and there I had my perfect and incredibly unique engagement ring. Once I had the ring, treasure map and collection of treasure boxes it was time to set the plan in motion with the first two boxes (out of 16). I decided to place the boxes on a mountain in Queenstown called Ben Lomond. Jenna and I were scheduled to climb it and I had hidden the boxes in my backpack. I got to the summit before her to hide the boxes and to my disappointment when she got to the top she walked right past the first one. And to make the fail even more complete once she spotted the box she refused to touch it despite my continued encouragement because she thought a box at the top of a mountain was “bad voodoo”. Fortunately, I managed to get this whole disaster on video and at the end of the day everything turned out amazing. Jenna found the map, got a little emotional and the Adventure Proposal had begun:

Like many other things in our life, I try to capture it on video, and this was no different. To read what happened I suggest checking out Jenna’s blog of the journey but to see it happen yourself watch the following videos from each separate adventure:

The Best Things in Life are Free

This was the final stage of the proposal and I think after 3-months of waiting Jenna was getting a little anxious for me to ‘put a ring on it’. So off to the beach we went for Jenna to catch the ride of her life while surfing. Truth be told I was getting a little excited myself to finally call Jenna my fiancee so instead of waiting through a full weekend of surfing to ask her to marry me I buried the final treasure box on the beach Saturday night and with a simple “yes” Jenna and I embarked our next adventure together 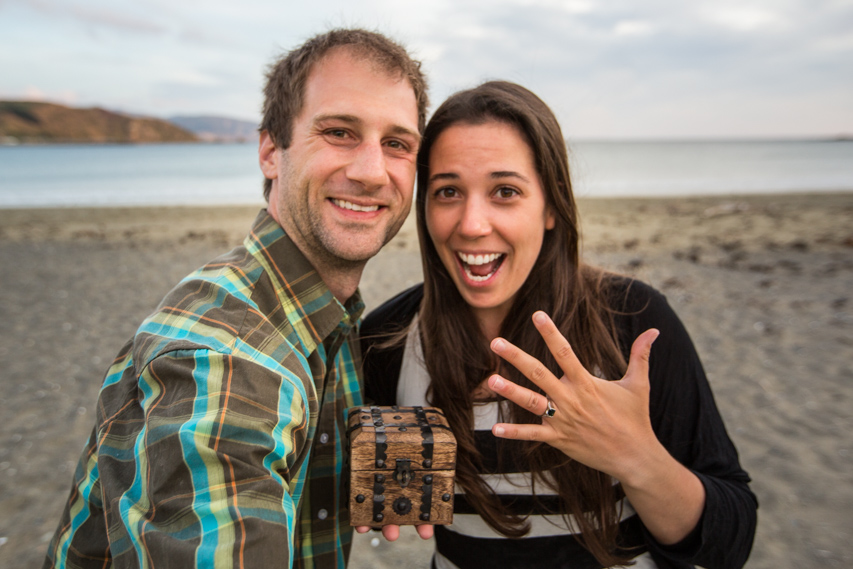